An Evening With The Sun God: Nick Visits Helios Back in 2015 I met this guy Scott at the Embassy during their annual homebrew comp. He was one of the other homebrewers so naturally we started chatting. He mentioned he was in the process of starting a brewery in West End and that it was going to be an environmentally friendly brewery, as they were going to harvest rainwater and use solar to power the entire thing. At the time it seemed overly ambitious, but I followed them on Facebook and kept an eye out for how they were tracking. Unfortunately due to licencing issues, they were unable to secure their West End location. I kind of lost track of how they were doing, until I saw that a new brewery had opened in Yeerongpilly named Helios. 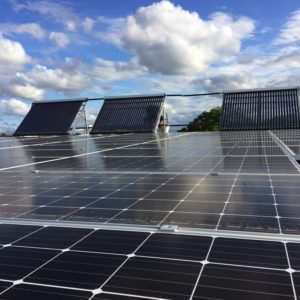 A few of us from the club went to check them out and have a chat with Scott about his brewery. Named after the Greek Sun God, Helios opened in December 17 with a 15BBL system. All of their beers are named after Greek Gods and they all have pretty cool artwork showing the gods in action. We got a tour of the brewery, and found that Scott’s initial environmentally friendly idea had paid off. He is an environmental engineer by trade and has set the brewery up with a few other partners. His original ideas had come to effect with the brewery showcasing a massive solar power system which powers the whole thing. They also set up a solar thermal system where their HLT water is heated on their roof before being stored in tanks waiting to be used. All in all while expensive to set up, their brewery will not only be good for the environment but will also save the owners a fortune in running expenses. 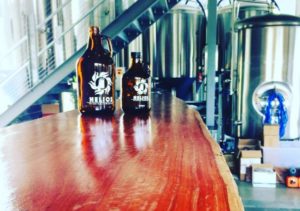 As for the beers, we had 2 paddles of four beers. My stand outs were Zeus IIPA and the Medusa Black IPA however all of the beers were very tasty and well made. The only unusual one was both Ziggo and I swear we could taste rose water in the pale ale. Scott denied this but there was something about it that screamed Turkish Delight – must be a Greek thing! They are doing to food truck and local musician thing at the moment so a visit can be a fun afternoon out. It is located on the other side of the train tracks from Slipstream so in a visit you can easily hit both venues (although I was rather drunk after doing this).