In 1972 the Australian Government amended the excise law, which then allowed beer with unlimited alcohol content to be made privately, provided it was consumed at home and not sold. In that year Ernie Melville made his first beer in a five gallon PVC rubbish bin using ingredients purchased from a health shop and fermented with “Tandaco” bakers yeast. The result was so disappointing that he decided to spend some time in the Public Library to find out more about the art of beer brewing. 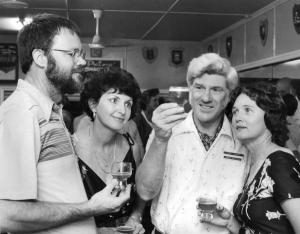 Private brewing had been legalised in England in 1963 so they were well ahead of us and some of their books and magazines were available here. The best of them was “Home Brewed Beer & Stout” by C.J.J. Berry so it soon became the reference bible with everything in it, including equipment and methods for making malt extract and mash brews with plenty of recipes.

By 1975 Ernie was producing a “reasonable” brew and started spreading the word at evening adult classes at the Holland Park High School and by 1977 it seemed that there were enough interested brewers to form a regular discussion group. With the assistance of Steve Hudson (first Treasurer) and Ron Williams (first Secretary), Ernie (first Brewmaster and storeman) rounded up a number of brewers from past classes. On the 18th April 1977, twenty-one people attended the inaugural meeting of the Brisbane Amateur Beer Brewers at the Holland Park R.S.L. Hall. Bill Gofton and Ernie Melville are the only current members who were present at that meeting.

The Club became very popular and by the end of the first year the membership had increased to over forty. The winemaking clubs by then had heard of our existence and some said we wouldn’t last.

The winemaking clubs, about eight in number around Brisbane, had formed their own association to share knowledge and to have interclub competitions. They also arranged an annual championship where the highest scoring club could win the “Challenge Trophy”. There were very few beermakers around at the time and they were not very well catered for at the event. Only three classes were available – bitter, lager and stout.

As a consequence of these competitions, a few of the best winemakers from the various clubs got together and formed a group of wine judges to get some uniformity in classes and judging techniques. They were kept quite busy going from club to club to meet their competition needs.

The BABBs were eventually invited to join the association and we were able to get more beer classes included in the annual competition and sponsorship was arranged for the brewers. The “Craven Filter Shield” was donated for the best beer brewing club. Over the last twenty-four years BABBs have won the shield twenty-two times even though some of our best brewers have been ineligible to compete as they had joined the judging guild.

On the national scene we have also been very successful. Throughout the eighties, in almost every year one of our members won “The Most Successful Brewer” award at the Australian National Amateur Wine and Beer Show in Adelaide, as well as many of their major awards and our presence is still being felt today. 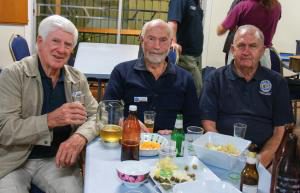 After some ten years of successful operation it was felt that a club on the north side of Brisbane was needed also. So in 1988, with the assistance of Graham Howard, Ernie Melville formed a new club, which met in a hall at Nundah. Initially it was called “Brisbane Amateur Beer Brewers – North” but when it became incorporated the name was changed to “Brisbane Brewing Club”. The membership is still strong and it caters for the needs of the Northside Brewers.

BABBs has now been operating successfully for over forty years and has been led by the following Brewmasters: