A Brief History of Barrel Back in early 2010 the then head brewer of Mount Tambourine Brewery and active BABBs member, Ian Watson, raised the idea of a solera style brewing project for the club. Members would brew a barrel’s worth of strong ale between them, it would then be inoculated with wild brewers’ bugs and aged in a used wine barrel. Each year a volume of the aged beer would be bottled for consumption by members, and that volume replaced by an equal amount of freshly brewed beer. This would allow the blended beer to change in complexity over the years as more and more batches are added to the barrel. Soon after, Ian managed to source a wine barrel from Mount Tambourine’s Witches Falls Winery and developed a recipe for a Belgian strong ale.

Twenty brewers each made a keg of the brew and they were dropped off at Craftbrewer for a year of conditioning and cold storage until Bacchus Brewing, sister company of Craftbrewer, had constructed their new barrel storage racks.

In early February 2011, when the wine barrel was ready for filling, all the beers were judged by some willing tasters at Craftbrewer to pick the top 14 brews that would be selected to go into the inaugural BABBs Wild Brew batch. At around 10% alcohol, by all accounts this was a very enjoyable session! 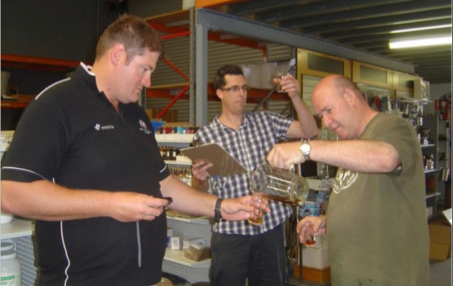 Rigorous quality control of the kegs going in to the barrel

Once the beer was in the barrel, ten packs of Wyeast 3763PC Roselare Ale (a blend of lambic cultures including lactic bacteria and Brettanomyces) were added and left to do its magic. Nine months later In November, a sufficient quantity of the inoculated beer was drawn off and lovingly bottled for presentation to BABBs members at the Christmas breakup party. Special labels were produced and the excitement was palpable as we each took home two bottles of this special beer that was two years in the making. On the night, we were also all treated to a preview tasting of the Wild Brew in a keg, as well as a re-brewed version of the original Belgian Strong Ale, minus the Roselare bugs. The consensus on the night was, although the original beer was fantastic, the Wild Brew was exceptional. The slight tartness from the lactic ferment combined with the barnyard funkiness of the Brett really lifted the complex Belgian malt profile to another level. Everyone agreed – we had to continue the experiment!

Over the next four years, the same beer was brewed to replace each bottling run, and the bugs kept on growing and making the beer more and more complex, and more alcoholic! At one stage, as the beer reached around the 14% alcohol mark and it was agreed we needed to bring it back down to improve drinkability. 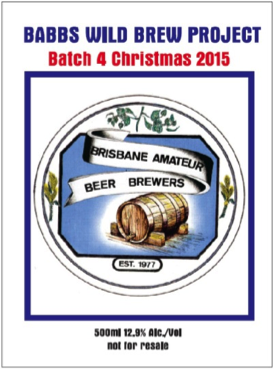 In November 2015, it was decided to draw off 100L for bottling and replace it with filtered water. We calculated that this would bring the alcohol concentration down to a respectable 8-9%, then added another packet of Roselare blend to kick start the secondary ferment again, as the previous brew hadn’t fermented in the barrel at all.

Twelve months later Ross at Bacchus took sample for testing the alcohol level and have a taste for “quality control” purposes. Ross called back with some shocking news… The beer was now barely 4% alcohol by volume, and tasted strongly of vinegar suggesting an acetobacter infection. (Acetobacter actually digests alcohol) Had we infected The Precious?! The good news however, was that Ross and his fellow brewers actually thought the beer tasted awesome. It was decided we would go ahead and bottle the beer for the upcoming Christmas break-up and then decide what to do with it. Fans of sours loved this beer, it was tart and refreshing, perfect for summer drinking and removing tooth enamel. Some of our members were not fans of this beer.

That’s the club Barrel, near the centre of the photo, second from the right. Thanks to Bacchus Brewing for keeping it safe for all these years.

On Ross’s advice, we contacted Ian Henderson, who is a commercial vinegar producer based near Stanthorpe. Yes, he is the brother of “Hendo” from Brewcult and Rockstar Brewing fame! Ian kindly offered to put our beer through his laboratory for analysis and would report back with his findings. What he found was surprising: there was no trace of acetobacter. We didn’t infect it!! However, he couldn’t tell us what caused the drop in alcohol. We were back to square one.

What to do with this beer then? To continue in the spirit of the Solera project, some bright spark suggested we blend the beer with another characterful style to create a new and exciting blend. A range of commercial beers were brought to a members meeting for blending tests. A highly scientific “taste it and see” approach was employed, with members eventually deciding that a blend with porter was really tasty. 100 litres of robust porter was brewed by members and added to the now weak and sour beer in the barrel. 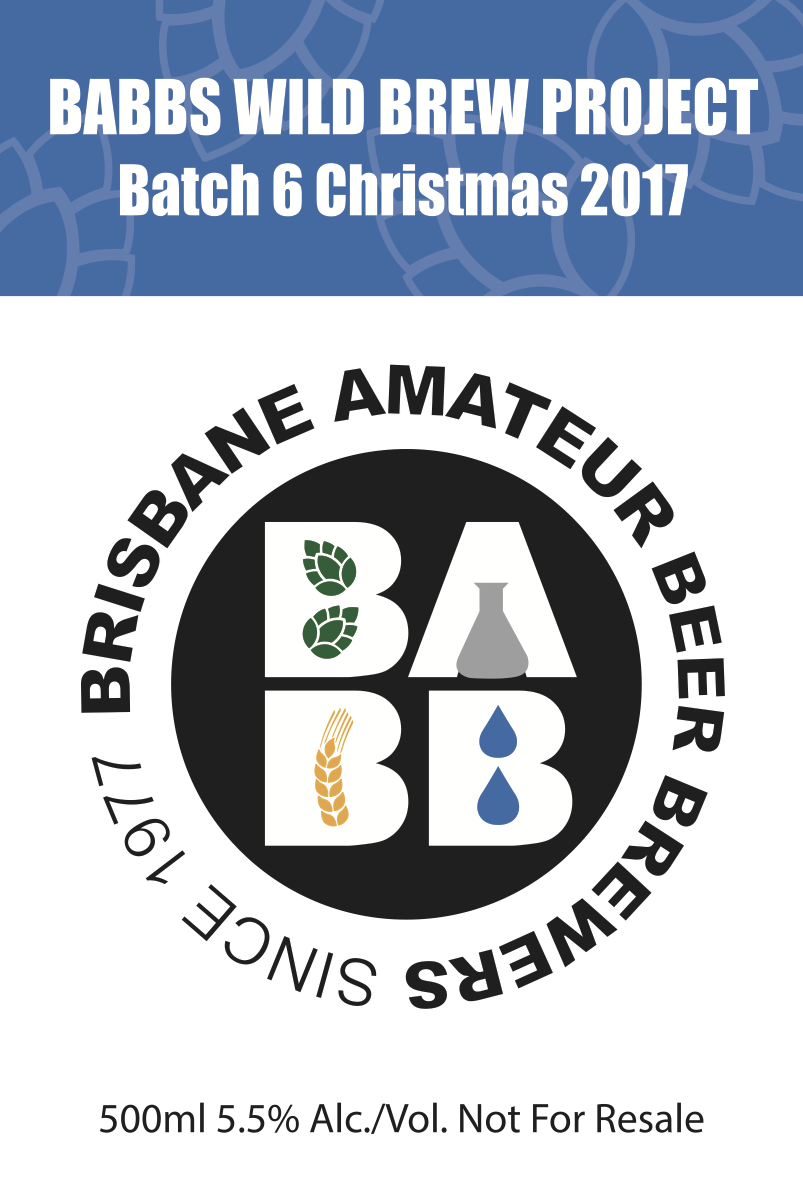 The 2017 Barrel Beer was a controversial one. This beer was still mouth puckering sour, with some interesting malt complexity but still very light and refreshing. Surprisingly after a year in the barrel, there was virtually no detectable roast flavour or aroma contribution from the porter.

A majority of BABBs members loved this beer, while an equal majority hated it. It’s still argued about after a few too many beers. Within BABBs it’s as contentious a subject as the “sprinkle versus rehydrate” debate.

A Fresh Start, and the Great Mystery Solved

After bottling the blended beer for members, the barrel was emptied and flushed out repeatedly with very hot water. It’s not really possible to sterilise a wooden barrel, but this process made a clean-as-possible slate for the barrel’s new era.

Flanders Red was the style chosen, and Perry Burt’s award winning, and frankly very tasty recipe (see below) was brewed by many of our members to refill the barrel. It was during this filling process that we solved the great mystery of the disappearing alcohol…

At some stage during the life of the barrel, with the original records lost in the mist of time, we had decided that the barrel volume was 300L. This is a fairly standard barrel size, but as it turns out not the size of our barrel.  While filling the barrel with freshly fermented Flanders Red, we calculated the barrel size to be about 225L. So there was no mysterious disappearance of alcohol, but instead we had topped up with water HALF of the barrel, instead of one-third. Less exciting than an alcohol eating bacteria unknown to science, but there you go.

So the barrel was filled with 225L of Flanders Red, and inoculated with a fresh batch of Wyeast Rosalare Blend.

Fermentation
Safale American Ale (US05) x 2
Pitch at 17C then raise and hold at 18C for three weeks before cold crashing.

Wyeast Roselare blend has been used in the club barrel to achieve the desired sourness and funk.

The first Flanders Red vintage was great, still young so only lightly soured,  but a great example of the style. We switched to bottle conditioning for this batch, where most previous batches had been force carbonated in the keg before bottling.

By 2019 the beer really hit it stride, more robust sourness, with great lightly fresh but funky complexity. The 2019 vintage was the first to be packaged in 500mL cans, also conditioned in the can. Reports are that those beers are ageing well, and still tasting great.

Once again we had a brew day with Gary at New Era on his SS Brewtech 1 BBL commercial pilot system. This produced about 100L of wort, that was cubed and taken home by members to ferment. Once again we drew from the barrel sufficient beer for 1L per member, and then topped it up using this fresh beer. Once again, the committee gathered to put this years vintage into cans.

2021 year marks the tenth anniversary of the club’s barrel project, and we’ve introduced a new label to celebrate. Thanks to the committee and Chief Steward Tony, and Gear Steward Pete for making it all run smoothly.

So if you’ve mad it this far, congratulations! You now understand the saga that is the BABBs barrel project. As a member, you can look forward to two bottles of the finest Flanders Red money can’t buy this November. Next Story
How to Really Clean Glasses